How to Stay in Fighting Form Through the Winter

During the Civil War, infantry tactics of the Napoleonic era dictated that the soldiers spent close to half the day drilling when they were in camp. The officers basically drilled the men until their arms were ready to fall off. And then they stopped briefly to eat or rest a bit, and then started to drill again.  The idea was to instill in the men a 'muscle memory' of the required movements, so they could obey orders even when half asleep from exhaustion or in the heat of battle. They wanted it to become a reflex.

As reenactors who only do this as a weekend hobby for about three or four months out of the year, and only get to do a well-organized Battalion Drill perhaps once or twice a year, of course it is rather easy to fall out of shape. The months spent cooped up indoors without much physical activity can leave us rather, well... soft.

If you're looking for a way to keep your muscles toned for battle during the long winter indoors, (and you're like me and don't have gym equipment or can't afford a gym membership,) here are three exercises that an experienced reenactor showed me who had been doing Rev War since 1976. It works best with a long musket, like the Springfield or the Enfield, but I've been involved in World War II more and more and I found it works just as well with my M1 Garand. It trains the specific groups of muscles that we use most often when dropping to our knees after running, getting up to run, and of course aiming our rifles.

I found these exercises to be most effective, try to do them once a day. It only takes a few minutes, and yes, you will have to get out your weapon to do this: 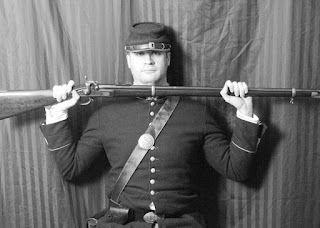 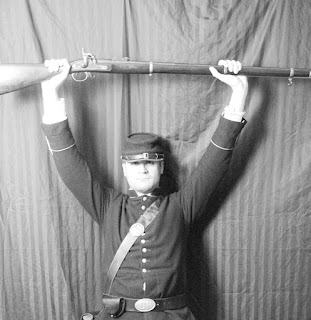 1. Hold your rifle or musket by the barrel and the stock horizontally, and raise it straight above your head (pretend you're one of those guys fording a river in 'Nam)


2. Raise and lower it slowly like a barbell several times, then hold it up as long as you can until you feel your arms getting shaky. Then rest for a few seconds, and repeat.  This works your shoulders and upper arms. 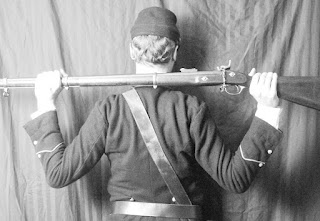 3. Bring the rifle down behind your head, so you feel your back stretching out. Dang that feels good. Stand up as tall and straight as you can. 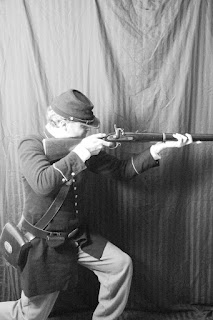 4. Aim your rifle or musket straight ahead, supporting it with your elbow on your hip, and crouch down on one knee, then come back up. Do this slowly 3 times. Rest for a few seconds. Repeat.  This targets the specific parts of your legs used in crouching down and rising up to move. Your knees will hurt for a bit. That's how you know you did it right. 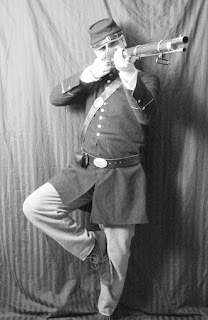 5. Aim your rifle or musket straight ahead while standing, then pick up one foot and place it against your other knee, like "Jethro Tull playing a flute" Keep standing on one leg, and try to hold your aim steady for as long as you can until you start to wobble. This is harder than it sounds, but it works a lot of muscles at once. The longer you can stand to do it, the stronger you will get!


6. While you got the rifle out, why not go through the Manual of Arms? (if you got the ceiling height for it) I have to go out and practice in the garage, due to some dents in the ceiling from a certain blunt instrument...  Here are some videos for musket drill you can follow for an example.


Or, follow Casey's Manual "By the Book" with this one:


Posted by WannabeSoldier at 8:34 PM No comments: