Sooo... I just sat on the deck this morning and rolled about 130 cartridges for the Enfield, using up very nearly a whole can of powder.  One 16oz. can of GOEX FFg gunpowder makes about 130-140 rounds depending on the load, and should last me an entire season.  I'll have to remember that.
5 days until Gettysburg! 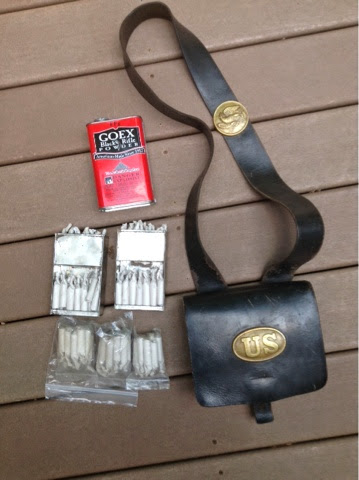 Posted by WannabeSoldier at 11:14 AM No comments:

Some More Sketches Made At Camp Geiger 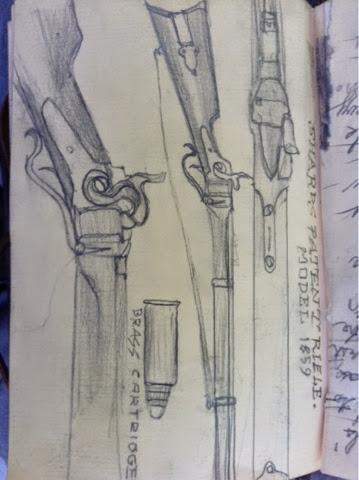 This one was based on the drawing by Winslow Homer of a sharpshooter in a tree. I made the guy into a bucktail. 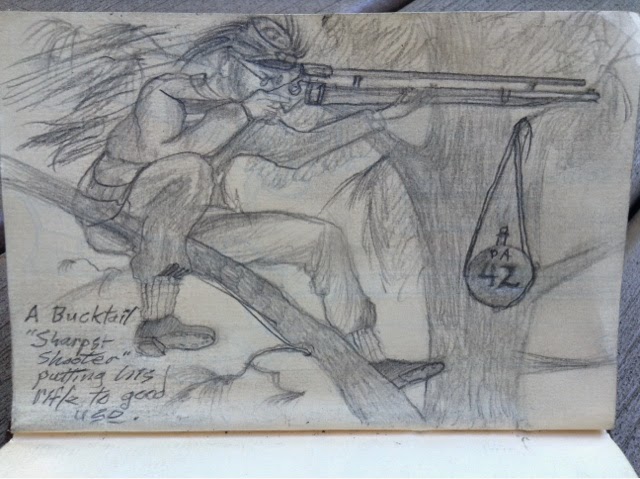 Posted by WannabeSoldier at 12:52 PM No comments:

Well folks, this past weekend I attended my first CW event in Whitehall, Pennsylvania, now known as "Camp Geiger" (in honor of the camp organizer's son who was KIA in Afghanistan in 2013).  I thought I should post a few brief comments about the experience, and maybe do a more detailed post later on (If I feel like it).

-The place known as "Camp Geiger" doesn't officially exist. It's a very tiny park on private land, and it doesn't appear on any map.  This was much in evidence by how difficult it was to find.  Not kidding, I drove right past the dirt road turnoff almost five times before I found it.

-There was only one wooden sign off the highway that said CIVIL WAR with an arrow, and it was poorly placed and there were no signs after that indicating where to go from there. I knew I was on the right road, but the entrance was danged near invisible. That was my only complaint, really. Make some better signs next time, make more signs and think about the placement.

-Its on a "Church Road" outside of Whitehall. But what the directions on the website failed to mention is that Church Road is cut in two.  I ended up on the Church Road on the wrong side of the city. There I was sitting in this tiny parking lot in front of a tennis court, and thinking "No way, this can't be the right place"  It turned out the road dead-ends right there, and starts again on the other side of the park, which is where I should have been.  (I was told it was behind an Autozone and a laser tag place called Planet Trog)

-Well once I got where I was supposed to be, the landscape was amazing.  We camped on top of a high green hill, surrounded by an idyllic valley and majestic mountains. It was very easy to forget that Allentown was just three miles away.  It felt like the Shenandoah valley.

-The weather was glorious.  The sky was blue, the grass was green and it was warm in the day and cool and breezy at night.

-This event is unique in that it attracts both 'mainstream' reenactors who like civilian camping and 'hardcores' who sleep in the mud underneath makeshift lean-tos...which is not unique in itself, but unique in the fact that there was no rivalry or bickering, elitism or snobbery. Everyone seemed to be getting along! What a change from our experience at the BGA Gettysburg last year.  Also, it's unique in that there is a thing called a 24-hour tactical.  There were only 2 real scheduled battles, and the rest was small skirmishes erupting here and there. The battle area was in a thicket of woods at the other side of this hill. There were earthworks and trenches dug (called "breastworks" because at this time men could stand up behind them to exchange fire while still protected)  We had the option of sleeping and living in these earthworks, but nobody made us if we didn't want to.  Anytime we felt like it, we could walk down the hill and rejoin the action, and quit whenever we got tired.

-Note: I like being as authentic as possible, within reason and given my means and health limitations...but it also needs to be understood that some reenactors want to bring their wives and kids along for the fun, and not everyone can be as tough as the real soldiers were. Sometimes it just isn't practical. Babies and little kids won't sleep on the cold ground in the rain, and women like some privacy too.  You have to be fair, because if you barred certain people from an event based on this, the numbers in attendance would dwindle from 300 or 1,000 down to like 10 people.  And face it, more people is more fun.  (And yes, I do have hardcore friends. No offense to them, but not everyone can do that and not die.)  You could say I'm like a progressive mainstreamer. Slowly getting better, stronger and tougher.... but not overdoing it to the point of death. I know my limits.

-I heard a few Confederate regiments boycotted this event for whatever reason, so for the first time in reenacting history we actually outnumbered the Southern forces. It was a welcome change.

-There were shots going back and forth all day, as these were unscripted scenarios with no fixed outcome, and we just used our knowledge of tactics and the terrain to let the fighting evolve on its own. I thought it was fun.  In 3 separate occasions, I and the other crack shot marksmen of the 42nd Bucktails were defending a dugout we called "The Alamo" from wave after wave of rebel attackers.  We had a good field of fire and could see other holes and all around us and tried to keep the trenches from getting captured by the Rebels.  A few times, I helped picked off a couple skirmish parties that made their way down the road to the left of our position and tried to flank us.

-We also "died" a lot.  We reenacted a small portion of Cold Harbor, in which the Union forces got massacred.  The Mifflin Guard color-bearer, of the 88th New York Volunteers, recreated a scenario which actually happened to another regiment. A man carrying the Federal flag of a Michigan infantry charged out across No-Man's Land with all his men. And the soldiers, seeing they were vastly outnumbered and outgunned, turned around and retreated. But the flag bearer was so far ahead and running so fast, he didn't notice there was nobody behind him.  The enemy infantry on the opposite side was so impressed by his courage, they actually held their fire as he stopped, saluted them, turned and marched slowly back to his line while holding the colors high, to the loud cheering of men on both sides.  It was an awe-inspiring moment. 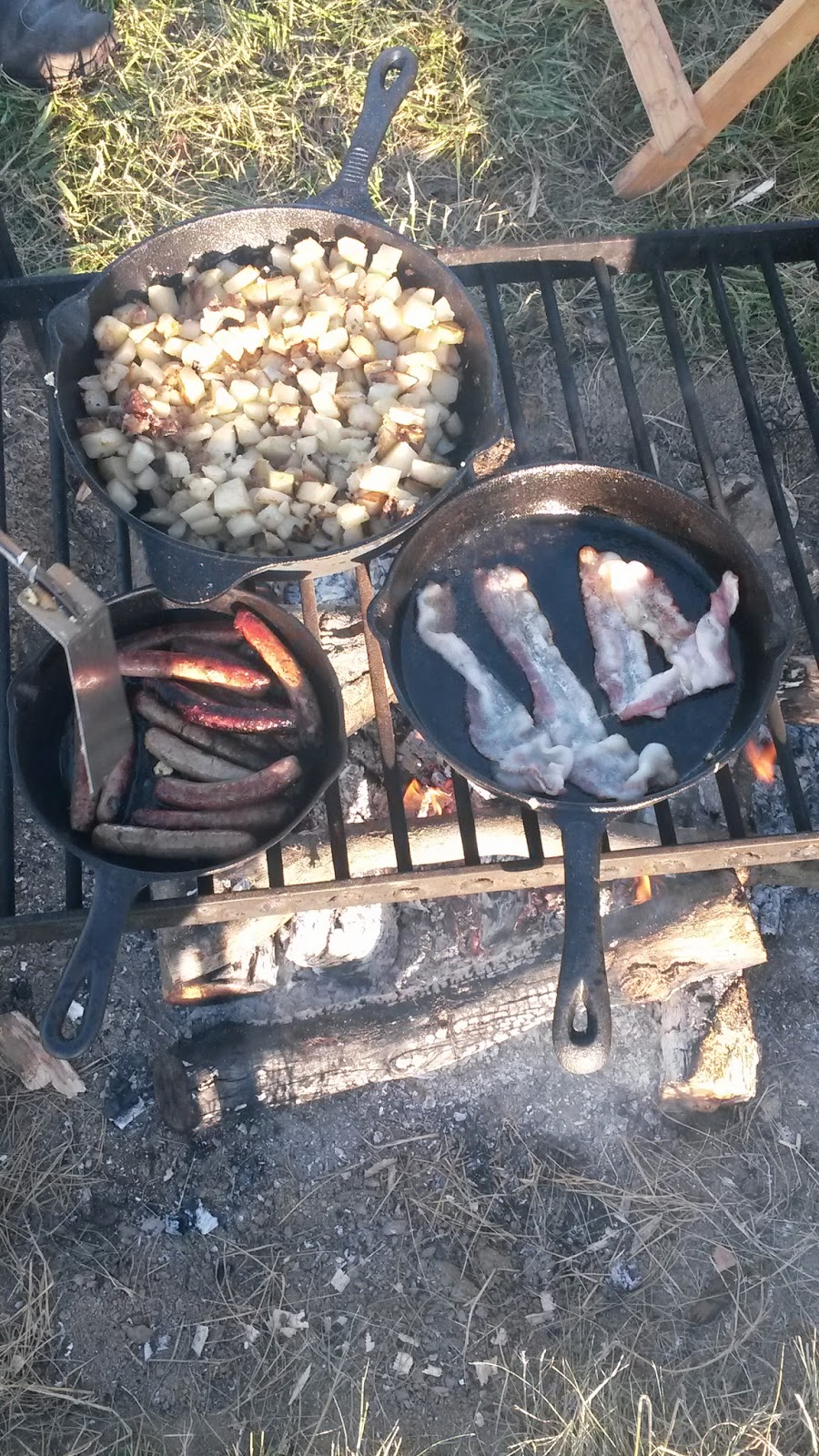 Mr. and Mrs. Autenreith of the Bucktails cooked us what might very well be the best meals I have had at a reenactment to date.  The dessert was amazing, it was some kind of cake with apple pie filling. For the Army, they sure are spoilin' us. I camped side by side with three families at this event, and their kids, ranging from age 2-10 years, were all playing together. It was a nice glimpse of a future I am honestly looking forward to someday.  We were all taking turns being babysitters this weekend.  And, I am proud to declare that I am not the tallest man in my company.


-I had used up every last round at Gettysburg last year and was completely out of gunpowder. But fortunately, the Dixon's Muzzleloading Shop was only about 15-20 minutes away, and I was able to buy another can of GOEX. I figured out one will last me about a year.

-After the amazing sunset on Saturday evening, we were treated to a stunning artillery firing demonstration at the crest of the hill.  The blue smoke appeared to glow in the dusk as it hung over the field, and the echoes from the shots were heard all over the place. A group of local yokels in the city set off some fireworks of their own, but they immediately surrendered once they heard our 3-pounders. :)

After Action Report:  I had a good time, and will look forward to doing this event next year.


Posted by WannabeSoldier at 9:25 PM No comments:


Video by Mike Nester
Posted by WannabeSoldier at 7:41 PM 1 comment: