A soldier's face revealed after 155 years

In the small cemetery of Emmanuel Church in historic New Castle, Delaware, there are very old burials and headstones dating as far back as the 1680s. One slightly more recent grave caught my attention for the amount of writing inscribed on it. This is the gravestone of Captain John Evans, a soldier in the 2nd Delaware Volunteers during the Civil War. It says where and when he was KIA, and unlike most soldier burials, it lists all the battles he fought in.
His headstone is below. 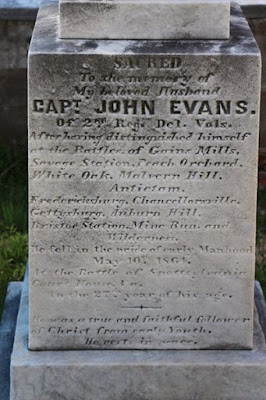 SACRED
To the memory of
my beloved husband
CAPT. JOHN EVANS
Of 2nd Regt. Del. Vols.

After having distinguished himself
at the Battles of Gains Mills,
Savage Station, Peach Orchard,
White Oak, Malvern Hill,
Antietam,
Fredericksburg, Chancellorsville,
Gettysburg, Auburn Hill,
Bristoe Station, Mine Run and Wilderness,
He fell in the pride of early Manhood
May 19th, 1864.
In the 27th year of his age
At the Battle of Spotsylvania Courthouse, Va.
He was a true and faithful follower
of Christ from early youth.
He rests in peace.

With the appalling death toll of Civil War battles and the short life expectancy of officers, I think it's amazing he survived 13 major battles, including the deadliest days in American history. What an incredibly brave soldier he must have been.

Now, thanks to a visit with the Delaware History Museum's research library this past Saturday, and with their permission to share for my readers, I have a copy of this man's photograph. 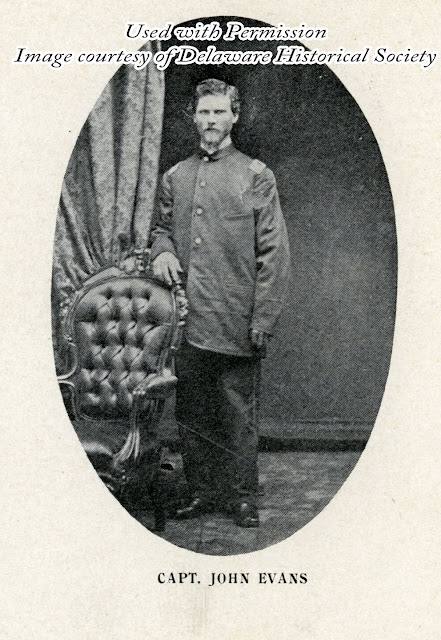 No more a faceless name carved in weathered stone... now this long-dead soldier can get the admiration he deserves. The things he must have seen and survived. We can only imagine.

This young individual, at age 27, led an entire company of 100 men in battle. A hundred scared boys with muskets, some of whom were mere teenagers, others may have been older than he was. He led them through 14 battles, no less.


I don't know how he was killed, but I think his career speaks for itself. With thirteen engagements under his belt, he must have been no coward.

So let his name and face be known, after all these years!

...I myself am related to a Union soldier who was killed in 1864, at the battle of Reams Station. And he was about the same age. His tale was somewhat less noble... but his is a story for another time.

Advice for Soldiers at Public Events


Get up and walk around!

-Go pose for pictures with young visitors; it will make their day.
-Go find a veteran and talk to them, invite them into your camp.
-Go visit other units, try talking to them. Make new friends.
-Go find the answer to a question you don't know.
-Go party with the other side on Saturday night, see what they think of your event.
-Go to the dance, even if you don't dance you can still watch.
-Go act out a scenario with friends to entertain the public.
-Go find where all the laughter and music is coming from, that's where the fun is.

Remember the public, we are here for them.

"I thank de lawd everyday for Mista Lincoln who gave me these beautiful clothes!" - Glory
Posted by WannabeSoldier at 10:28 PM No comments: