This is very dramatic and well done. Blue-Gray Alliance 150th Gettysburg...The Culp's Hill battle I wasn't allowed to fight in but was lucky to be close enough to watch.

I was there. I saw this.

Some recent sketches in my Civil War sketch journal I forgot to scan.  Okay, so I really like eagles. You got a problem with eagles? 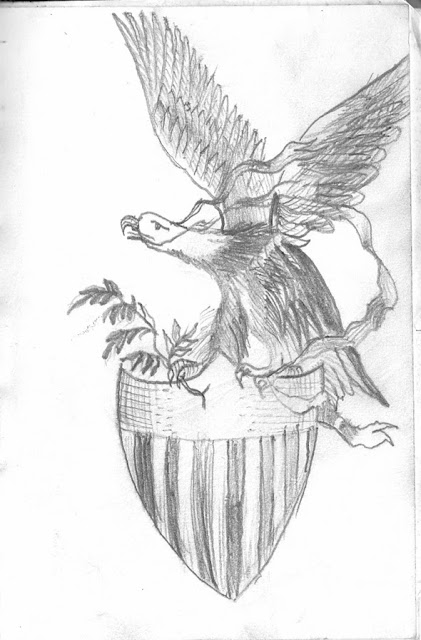 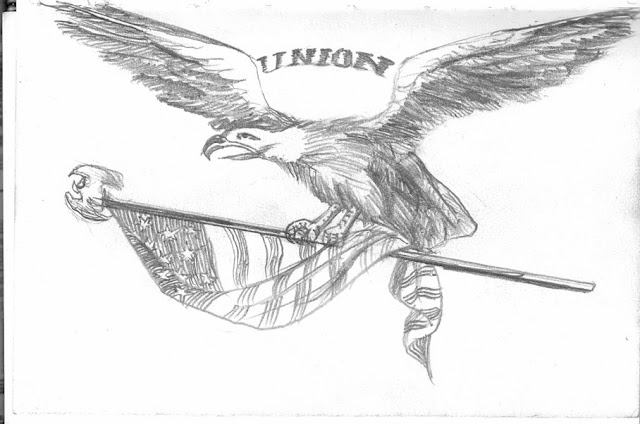 The Civil War in Technicolor

The picture above is almost impossible for any Civil War junkie not to have seen... the three (until recently) unidentified Confederate soldiers at Gettysburg. It is true...these three men now have names and their living descendents have been found.  But here we see this iconic image in a new way: in startling color. Suddenly, a picture in a million books becomes a window into their reality.

Two longtime Reddit users,  Mads Dahl Madsen and Jordan J. Lloyd, who started a company for digital image restoration, have changed selected pictures from the Library of Congress into color and brought new life into these 150-year old images. Check out the link below and see it for yourself.

As a digital artist who makes heavy use of Photoshop, and as a historian who likes to stare at old photos, I know that restoring old and badly damaged photographs from another era is not as easy as it looks.  Software makes it easier than ever before to add color to a monochrome image, but certain details, like hair and beards on people's heads and leaves on plants, are very challenging. I don't pretend to know how they did these so well, but they really are doing a fantastic job at making these long dead soldiers come alive.

Maybe my experiences as a reenactor have given me the sights, sounds, smells and sensations of living in the 1860's, and this grants me a connection to these images that normal people simply don't have.  I feel like I am there, and these are actually living, breathing people again in these photographs. I know how hot and humid it was on those battlefields in the summer, and how scratchy their wool uniforms are.  I know what it is to be tired, footsore and hungry after hours of marching with inadequate food. In a way, I know how some of how these men felt and I have seen some of the things they saw.  I feel a sense of brotherhood with those incredibly tough, brave and rugged men. When I study their expressionless faces somehow I can still feel their anger, longing and sadness over their nation in turmoil.

The same thing happens when I look at photos of my grandparents, and their colorful past which I grew up mostly unaware of. I am grateful as a living historian for a chance to travel back in time and see some things through their eyes.  It has certainly made history real for me, and not dead and buried legends in stuffy academic books.

For me, this seems to erase the century and a half between us and somehow bring them closer.

For more examples of the past as you've never seen it before, here's the ColorizedHistory page itself.
Posted by WannabeSoldier at 8:54 AM 2 comments: