Reenacting Ribbons Made into Medals

All of the important 150th Anniversary Civil War reenactments gave out a ribbon with a medallion to every soldier, by popular request of the participants as a souvenir. Most of these were meant to be worn around the neck. Since I personally don't think I'll ever want to wear them in that fashion, I got the idea of cutting off the ribbons to make military-style medals to pin on my uniform... So I can impress the ladies at the ball. If you like this idea, pass it along! 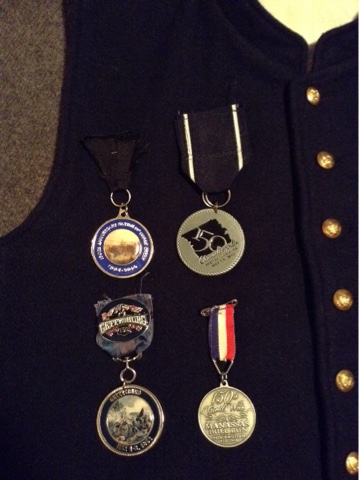 Posted by WannabeSoldier at 3:38 PM 3 comments:

Please be considerate of the public...

Disclaimer: if this article offends you, please move on.

One of my pet peeves at reenactments is when those of us in camp tend to huddle in tight groups around a fire, rudely ignoring others and talking about things that have nothing to do with our reason for being there. Especially when the public is around. If there are spectators milling around in the camp and peeking inside our tents, we should be talking to them and answering questions, because that is supposed to be our job.  Without the public interest in what we do, the parks and historic sites won't have the funds to keep hosting events.  We cannot lose sight of the fact that we are there for them.

I was at a living history-battle back in September last year (at an undisclosed historic site) and was particularly annoyed, because the reenactors who were there seemed to be ignoring everyone who tried to approach them. These soldiers (who will remain nameless) were in a circle, drinking Bud Light from aluminum cans, smoking modern cigarettes, and seemed to be enjoying themselves. But their conversation topics were completely irrelevant and out of place for the 1860's.  Topics ranged from gun control, racist remarks, homophobia and the war in Syria...to disparaging remarks about a heavy-set woman who had made an unfortunate wardrobe choice that day, and was walking around in shorts and a tank top that exposed a little too much skin (I should also mention it was very hot out that day) trying to keep up with her two very young kids who were getting into everything.

Not only did this irritate and annoy me, I found it disgusting. Not the woman, the reenactors.  I wanted to go around the circle and smack the lot of them in the face, one by one.

First off, don't ignore the people who want to learn from us. Second, get those modern things out of sight when the public's around. Third, don't mock people behind their backs. It's low.  And finally, I really wish we could keep modern politics & current events out of reenacting. I don't drive 150 miles to listen to you guys argue like teenagers about the same junk I see in my Facebook news feed.

If you want something to bicker about over the campfire, make it about the Republican debates for Lincoln vs. Hamlin or Lincoln vs Douglas. Express your concern that the whole entire Union army is doomed because McClellan's such a turd and General Burnside doesn't look any better. Reminisce about life back home, make up some funny stories.

If you want to discuss economics, then it better be 1860s agrarian economics or I don't want to hear it.

Instead of going on and on about war in the Middle East, maybe we should discuss Western expansion, and how the fight against the Indians is going.

If you want to talk celebrities, discuss John Wilkes Booth's stage career and what a great \ terrible actor you think he is.

Instead, think about how homesick the soldiers were. Talk about how Annie back at the tobacco farm hasn't answered any of your letters since the old horse died, Jimmy has tuberculosis and you're afraid he won't survive the winter since the doctor skipped town and ran away with the shoemaker's wife.

This isn't hard to do...just read some books, do some research and be creative people!

And PLEASE, pay attention to the public and show them the same respect you want them to show you.
Posted by WannabeSoldier at 10:50 AM 2 comments: