Hey to all my invisible readers out there! (I know you exist, even though I only have 7 followers my views are up to 7,992 today)

I decided to take part in the blog party started by Miss Stephanie Ann at http://www.worldturndupsidedown.blogspot.com/. While I am certainly no stranger to social networking, my friends on Facebook are treated to almost a continuous documentary of my life in photos.  I just really like to take pictures.  It started sometime in 2004 when I picked up my first point-and-shoot. I've been averaging hundreds of photos a month for the last 9 years, and they have been getting more artistic all the time as my skills improve.

As I write this I am at my grandmother's house in upstate New York, a place where I have many happy memories from growing up.  My grandfather bought up a substantial chunk of forested land (about 112 acres) along a state highway, in between the tiny town of Boonville and the decent-sized city of Utica.  Together they spent 40 years turning a small 1830's farmhouse on this private land into a place for their five children to grow up, and the extended family to get together.  The incredible thing is my grandpa actually re-designed it himself and rebuilt the house as it now stands, with minimal outside help.  We have his floor plans and meticulous drawings of every detail, along with his pictures taken at every stage of the construction.   He was a retired Navy and Air Force veteran with an incredible story, serving in the Submarine Service during World War II, and had a lifelong job as an electronics engineer for the Department of Defense.  But enough about him for now, if you have any more interest I devoted an entire blog to his memory.

After my Grandfather's passing in 1995, my grandmother, being the tough Depression survivor she was, stayed with us for seventeen years. She was able to mow her own lawn and maintain her forest well into her early eighties.  She kept herself busy by doing all sorts of things like establishing a food pantry in her church, donating tons of food and clothing to impoverished countries like Ukraine, making dresses for little girls after the Haiti earthquake....  She was an active leader of the local 4-H Club as well. She tried to give us all a good Christian upbringing, in some of us it took better than others.

My grandma passed away April 20, 2012 after a long battle against her heart condition and what appeared to be pneumonia.  Never an idle person, she was working on some large quilting project the week she got sick.  She liked to collect things, and the garage sale we held while her house was being emptied is good evidence of that.  We could have made quite a business if we turned the entire house into an antique shop! 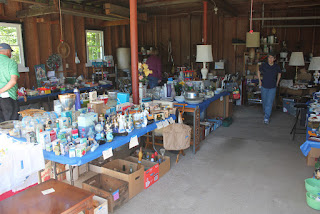 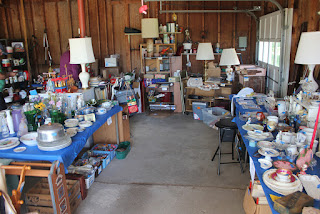 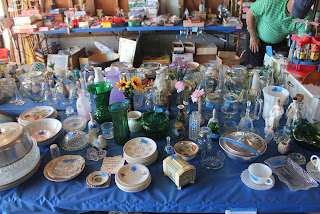 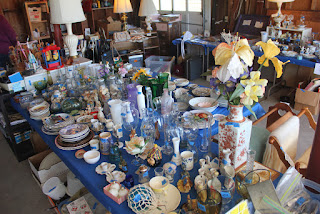 Here is the house as it stands today, with some fresh new coats of brown paint: 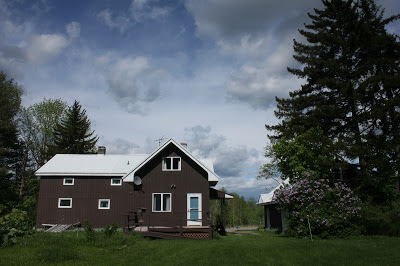 It is now almost empty inside, but when the sale was done her surviving family all talked about it... and couldn't bring ourselves to sell the place.  Too many memories.  My parents and my Aunt and Uncle decided to keep the place, in hopes of retiring there.  I am overjoyed at this, because someday I really wanted to bring my own family to visit "grandma's house" like I did every year.

What is so special about this land?  A 20 minute walk through the "backyard" and it becomes obvious.

The forest is mostly pine, with some boggy areas in the "deep" woods.  The beginning part of the trail is younger, mostly birch and oak trees with a thick carpet of ferns.  I like the picture below; this passage really reminds me of the forest "Chapel" described in the Red Badge of Courage.  Incidentally, the deep woods trail begins at the crest of a steep hill that totally resembles Little Round Top.  Many times have I pretended I was defending this high ground from the invisible Rebs creeping through the trees. 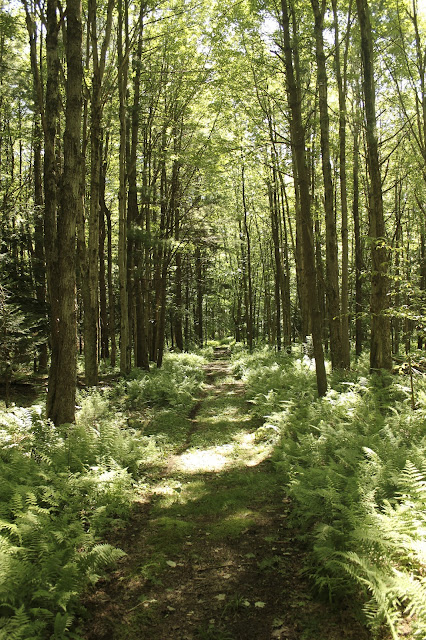 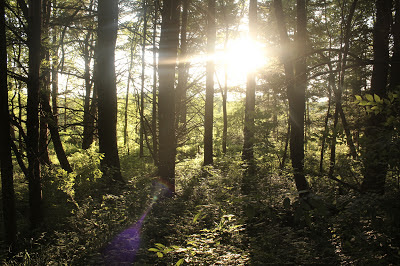 With no one here to tend the gardens around the house, they developed a sort of wild and untamed but still attractive look: 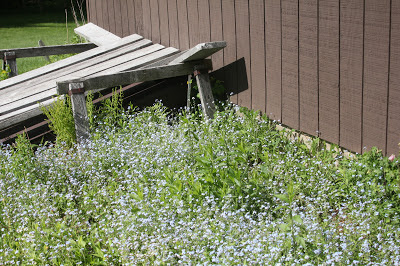 Lots of work is being done to improve the less attractive parts of the property. This is the crumbling foundation where the milk house once stood when it was a farm. My grandpa used this site to stack firewood between the upright metal pipes, there's a lot of old roofing shingles, bricks and rusty metal in there. The area was choked with weeds and it had always been a hiding place for snakes. 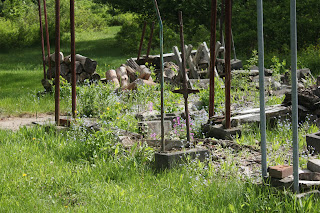 Here's what it looks like now. We hauled away most of the junk and left a small place to stack firewood. If we could break up the concrete someday it might be a garden. 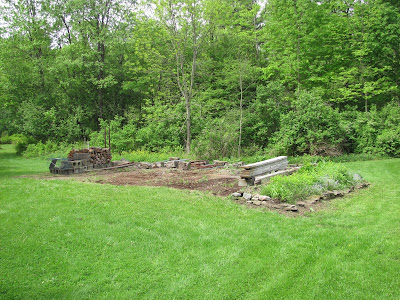 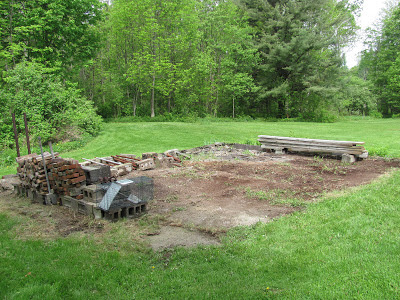 May 25-30, as some of you might be aware, Mercury, Venus and Jupiter will be visible in the sky in a tight triangle pattern. I think I might have gotten a shot of it last night! As well as a decent photo of the Big Dipper as it was directly over the house.  The air is so clear in upstate New York, and we don't have the bright orange sky full of light pollution like we do near Philadelphia. The nights get so dark here that the conditions are ideal for observing astronomical events. 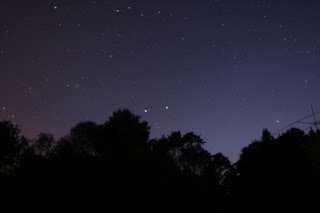 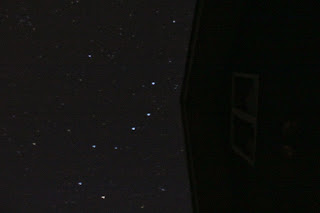 When my Mom was growing up here, she was able to see the Northern Lights in the wintertime during periods of intense sun activity. She said that her father would be upstairs using his radio equipment and could hear the static, he would come down and say "turn off the lights and look out the window" and sure enough there it was.

Sometime in the 1960's there was a huge blackout that covered the state of New York for a few nights, and both my parents said that was the only time they could ever see the stars in the Milky Way.

May 28-  Today it was raining lightly on and off.  Dad said he was going outside to clear out a thick jungle of bush surrounding a maple tree in the backyard, something we had meant to do for many years.  I go outside to help barely an hour later and he had this much done already! 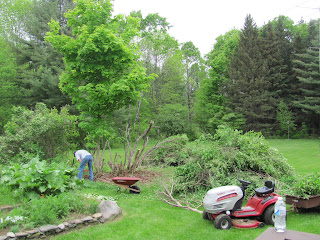 This is me on the tractor. I told him wouldn't it be easier if we just piled the branches on the cart and hauled it off to pitch into the old barn foundation? Instead of dragging one branch at a time...  If Grandpa had been here I think that's what he would have done. 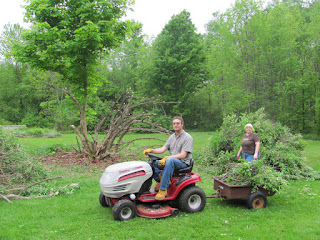 So we figure this young maple will grow up into a nice big shade tree in the middle of the lawn over the next 10 or 15 years.


I also found something kind of new and fun (for a city boy at least) Not used to having so much open space to run around in.  This is me mowing the north field. 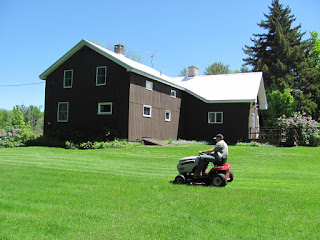 
May 30- This was our only real "vacation" day.  Today we decided to drive into the Adirondacks for the day, take in the scenery and visit two museums, including one that none of us has been to since 1997, when I was 12.  I will devote a separate blog post to this adventure.

May 31- The battle of Man vs. Tree continues.  We were out all day trying to clear away this gnarly bush around the maple. Conveniently, the chainsaw we brought up from Delaware wouldn't start, so we had to cut it all away by hand.  Both my father and I are stubborn enough to not walk away from a job until it's finished, so we were out there all day in the burning hot sun hacking away at this monstrosity.  This is the aftermath: 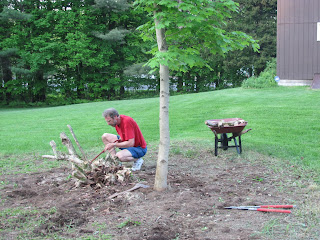 Looking at the huge 'footprint' left by this overgrowth, I don't think anyone realized how huge this thing had gotten. It was the size of a log cabin and completely obscured this young tree in the middle. I never even knew it was there! The monstrosity turned out to be a honeysuckle that my grandfather tried to remove years ago. It just kept getting bigger and bigger as we mowed around it.  This, folks, is what happens when you let weeds get out of control. They grow into trees!

June 1 - Well, this has truly been a working vacation. We worked our rear ends off every single day but we think the property now looks better than ever. It's gone from wild and unchecked to neatly landscaped.

This concludes my contribution to the blog party, since I will have lots of work to do when I get home.  A World War II reenactment and a new job to get ready for, and in another 3 weeks or so...Gettysburg!

Private "Jonah Q."
Posted by WannabeSoldier at 6:41 AM 2 comments: