Some Lame News - But A Nice Picture

AUTHOR'S NOTE: This journal will be updated a lot less often now, since I am no longer active in the Civil War hobby. Between the global shutdown and all the event cancellations due to Covid-19, my photography business put on hiatus and my own financial struggles, one of my hobbies had to go. I had to make a tough decision to sell off most of my gear and retire from 1860s living history. My rifle is gone, as well as my tent and most of my gear. You will not see many new posts on this site going forward, unless of course I volunteer for a day at Fort Delaware or I go to an event as a spectator. My reasons for leaving the hobby go much deeper than this, mainly I cannot stand the re-emerging racism and modern politics starting to loom over something that used to be fun and educational for the public.  I do WWII events almost exclusively now and have a far greater collection of uniforms and stuff, as well as a better family connection to the 1940s.

I attended one Civil War event this weekend as a spectator with a camera however, and got some amazing images with a new lens I bought last year. Like this one, which I think is my favorite from the whole day: 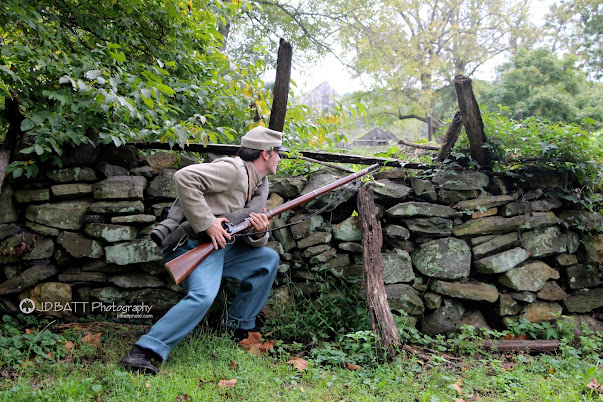 I took this picture of a friend at the Colonial Pennsylvania Plantation in Ridley Creek State Park, during their annual Civil War skirmish this past weekend. This is what I love about the Plantation, the backdrop is perfect for reenactments. Not a single modern thing in sight. I think this photo in particular has an illustrative quality to it so I wanted to do something special with it.

I think this is my favorite photograph I have so far and I've been shooting photos of reenactments for 7 years. I liked it so much I wanted to turn it into an engraving for a story in an imaginary issue of Harper's magazine. So I did some intense Photoshop work and this is the result: 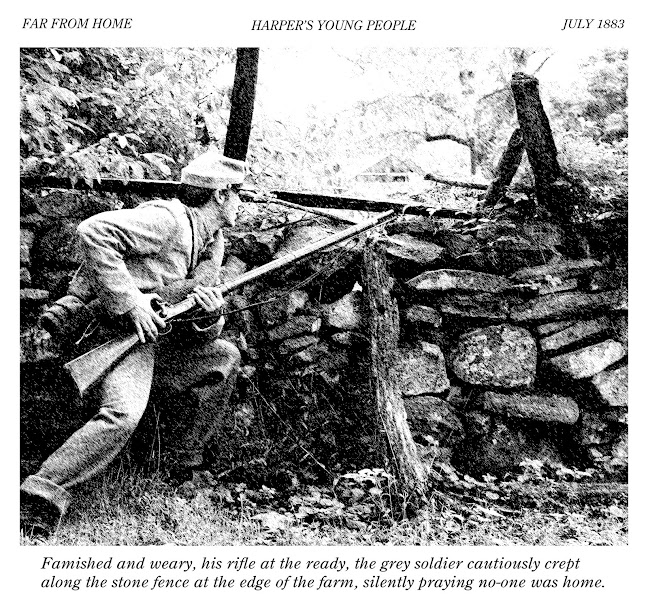 The Revolution and the Civil War were still very popular subjects for stories at a time when everybody read books for entertainment. American history was fascinating to boys and young men. They liked to read adventure stories about military exploits, discoveries, tales of sailing on the high seas (I've read some Navy stories but most of them involve pirates). Historical fiction was hugely popular. Fantasy and science fiction at this time were still fairly new & unfamiliar genres and they were very exciting, but history was no less interesting. Generally it seems young people near the turn of the 20th century were curious about what America was like "in the old days" and they longed for the simpler pre-industrial times.

Harper's, (of the famous Harper's Weekly newspaper) started making bound literary collections of poetry, humor and short stories for young readers in the 1880s called "Harper's Young People." In 1895 the name was changed to Harper's Round Table. I have a Harper's Roundtable book from 1896, the pages in it are very thin and falling apart but I have read some of it. The illustrations for these stories were prints made from engravings and were amazingly detailed.  For examples, see my 1896 Roundtable posts: Civil War Drill Camp for Boys, Passing The Winter, A Song for Christmas Eve,  The Man Who Invented Santa Claus

This image had to be turned to monochrome and layers of digital filters put on it...I upped the contrast, played with shadows and highlights, overlaid a film grain filter, added a "sketch" filter with high detail and then cropped it to fit on a page with some typesetting, as if it was from a book.

In this scene, I imagined a Confederate soldier ran away from a battle or he got lost somewhere in Pennsylvania after Gettysburg. Maybe he's seen enough of the war and wants to find his way home. Perhaps he's been on the road for a few days without food, he's tired and he can't go on much longer. So in this scene he's come across a farm, maybe he hopes he can forage an ear of corn, some carrots or a few apples without being seen. He's in enemy territory and he knows he could be shot on sight, unless he's very lucky and the family are Secessionist sympathizers. What will happen?

Posted by WannabeSoldier at 9:30 AM 2 comments: