In living history encampments, I noticed I had nothing really to do between drills but sit there, talk and eat.  I wanted some old-timey activity I could do that I wouldn't mind spectators watching.  So this idea of keeping a sketchbook is pretty cool. My pencil holder is no bigger than a cigar case and fits easily in my trouser pockets. The sketchbook itself is only slightly bigger than four by six inches, and I can stuff it in just about anything without taking up too much space.  I also tend to draw in it on rainy days at home the week after an event.

First, here's what the cover of my little sketch journal looks like. The newsprint is actually a paper gift bag from Hagley Museum.  Next time I visit that place I should probably ask for a few extra gift bags. I just love the old advertisements. 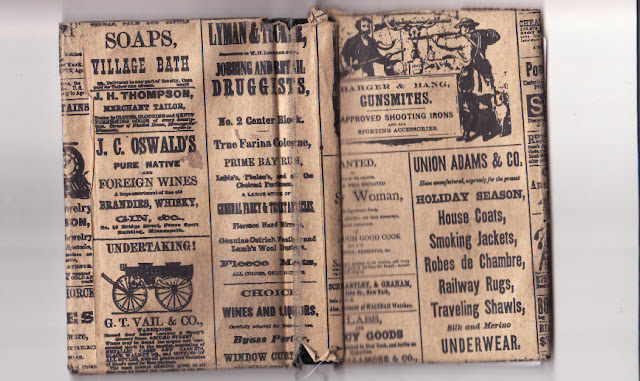 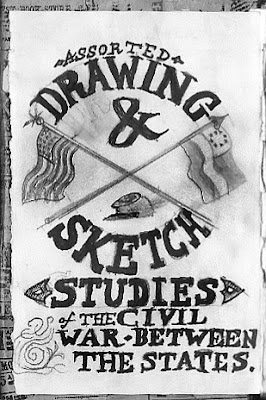 Above, the title page. This is hand-lettered. I know my letter spacing isn't perfect, it gets crowded near the end of the page, but it looks like I'm trying to mimic typeset and printed letters, which I am. 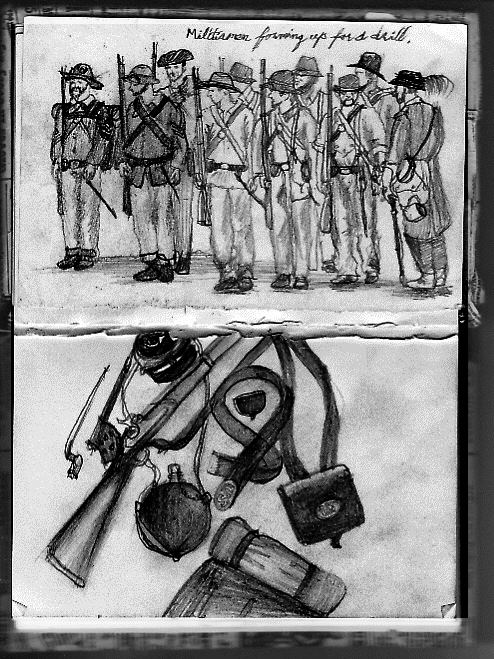 Above, two new sketches. Those are the best people you will ever see me draw. I had to use a photo for a reference, it was a firing line of one of the New York infantries from 1st Manassas.  They wore the bright red fireman shirts with the shield-shaped "plastron" beneath the collar, visible on the man standing second from the right.  Below, my accouterments as arranged on the floor of a house where I spent the night.

Most of my sketches made on-site will be of everyday objects used in camp, or maybe unusual tent configurations.  I'm not one of those sketch artists that can quickly scribble out a battle unfolding in front of me, I also can't draw people or animals without a photo reference.  But still, it gives me a way to challenge myself and work on my neglected pencil drawing skills. I'm trying to avoid anything in the drawings that would make them look inappropriate to the 1860s period.

There will be many more to come!
Posted by WannabeSoldier at 12:28 PM 1 comment:

I logged in today and my page view counter happened to read 1776.  Happy belated Fourth of July, folks!

Last week I didn't go anywhere special to see the fireworks like I usually do. Where my house is located we can hear them going off in several different directions at once and see flashes in the sky though, and occasionally some explosions over the tops of the trees. It sounds like a battle going on all around us. The kids shooting off their own little pyrotechnics in the street only add to the combat zone feeling. It's quite an experience to sit outside, watch and listen.

I will start preparing an upcoming post about my experience in Gettysburg last weekend camping outside in a blistering 103 degrees, the hottest day since 1st Manassas (also called Hot-nassas or Sweaty-asses) But for today I will post some answers to a survey on Miss Stephanie Ann's World Turn'd Upside Down page. A link to this will also be posted in her comments.

1. Websites, blogs and social media can skew our lives and make us look hyper-focused on one aspect of your life. What are some interests/hobbies/ect. that you have that you think your readers/friends might not know about?

I believe in ghosts, hauntings and UFOs, and like to research things that happened a long time ago but were never explained. Like what happened in the Siberian forests of Tunguska in 1908? How did primitive civilizations, existing centuries apart and separated by vast oceans, build similar structures with stone that would be almost impossible today even with lasers, machines and advanced mathematics? Were the Germans developing advanced aircraft in the 1940's that far exceeded the capabilities of our own today? I also have a morbid fascination with great disasters in history, either natural or man-made. Many a sleepless night has been spent looking up stuff that engrosses me or spooks me terribly, which could be one reason why I don't sleep.

Also, I am and always have been a huge geek about Star Wars. I like the franchise and the universe so much, the ships and the robots and the weird aliens were very cool to me as a kid and they still are. Even 35 years later the old movies are still as fun to watch as the first time. But the prequel trilogy was just…overdone. And nobody seems to have anything good to say about the new movies. So I don't publicize that I like Star Wars anymore.

2. What have blogs/the internet introduced you to that you never knew about before?

The internet itself has made me aware of the existence of really cool things I never would have otherwise found, but also many things that I wish never blighted this Earth. Ever since my brother first showed me stuff from 4chan I think part of my soul died. So 20 years from now, will anyone truly care about or understand these stupid 'memes'? Imagine trying to explain this stuff to your grandkids.

3. What are your top 10 most visited websites?

4. What is your favorite/most bizarre/interesting fact about something in history?

Hard to say, I've researched so many bizarre/interesting things. In the 19th century, especially during the period of Civil War, people seemed to have a much more morbid fascination with death than we do today. Maybe because it was fought on their farmlands and within their cities; they were much closer to it than we are. In the New Millennium we just don't hear about guys getting their arms or legs blown off in Iraq, preserving their mangled limbs in formaldehyde, donating them to a curiosity museum and coming back to visit them every year. That's creepy by today's standards. And I know poor infant survival rates due to disease or high-risk birth was more or less a given thing they didn't know how to prevent, but have you ever seen the portraits they used to take of the bodies of exhumed children, dressed in their clothes and posed as if they were still alive or just sleeping? *shudder* perhaps they were just more comfortable with it as a fact of life. We tend to hide it now or hide from it.

This is over in England and before the Civil War, but look up who Jeremy Bentham was. He chose to be stuffed and put on display after his death at the university he helped to establish. 0.o spooky , man.

5. If you could wake up tomorrow and have acquired a new skill in your sleep, what would it be and why?

The ability to do math. Because I have a serious learning disability in that area. It could help me get a much better job.

6. If you could spend 1 year in a different time period, which would you choose and why?

It wouldn't be the 1860's. I may enjoy reenacting it (most of the time) but the more I learn of how primitive their knowledge was about things like surgery, food preservation and prevention or treatment of diseases, the happier I am I wasn't alive then. If I had to choose a decade, it would be in the 20th century, either post-WWII 1940's or the 1950's. It was the age my grandparents thrived in and my parents were born. I wanted to experience life in our country as it was then.

7. What are your internet pet-peeves?

a) pEoPLe wHo TyPe LiKe ThIs.
b) Ppl who got2 abbrevi8 everything 2 b cool or use num83ers 4 l3tt3rs
c) People who think it's hotttt to slurrrr worrrrrrrds for emphasisssss.
d) The messages I have gotten from dating sites that were formatted like the above.


8. What is your newest hobby/interest? Tell us a little about it.

Reenacting! As an 9-year old who went with my parents to see my first Civil War reenactment, I never imagined I'd be doing it. Not even in college did I think I'd be strong enough, healthy enough, or have the stamina. You must like reenacting or recreating history, or you wouldn't be following my blog.

9. If you could invite 3 deceased people to dinner who would it be and what would you talk to them about?

Both of my grandfathers and my great uncle, who all fought in World War II. There were so many things I always wanted to ask them but I was too young. Maybe they'd tell me now that I'm older. I suspect that my Dad's father was an even greater man that any of us realize and he just didn't want the recognition. And my Mom's father would definitely have good stories. My great uncle Bill I never knew very well, but my relatives all say he was the funniest person they knew and I would have liked him.

10. If you had to play a character in a movie, who would you play and why?

I am so terrible at acting and being anything other than me, so I don't really know. Maybe if I stick with CW reenacting I'll have at least a remote chance of being an extra in a movie.
Posted by WannabeSoldier at 7:28 AM No comments: